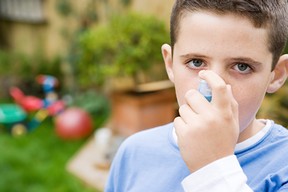 Asthma is a chronic lung disease that causes the airways to get inflamed and tightened. People who have this kind of illness tend to make a wheezing sound when they breathe because of the narrow air passage. Asthma affects people of all ages and commonly starts during childhood. Asthma in children doesn't come as a surprise, especially when they have a weak immune system at birth. Allergies are one of the most common causes of asthma. In order for a child to overcome this kind of illness, proper monitoring as well as keeping the child away from the triggers of the illness can lead to an early recovery from the condition.

In the United States alone, where the National Heart, Lung, and Blood Institute listed a record high of 7 million children who have asthma, the statistics did not promise lower and reduced occurrence. Since there is no concrete study that shows a specific cause of asthma, medical research proves, however, that there are several asthma triggers that can cause flare ups.

What causes asthma in children?

There are many known causes of asthma that increase the risk of getting an asthma attack. Known triggers can also result in more severe flare ups and keeping your child away from them will help reduce the occurrence of asthma symptoms.

Family history of asthma is not a trigger, but it is a genetically acquired illness that can be passed on to the next generation whether you like it or not. If a child develops asthma from a family history, the best thing a parent can do is to avoid exposing the child to possible triggers.

Babies who were born with lung problems are likely to develop asthma as they grow up. Their weak lungs are very prone to irritants causing constrictions to happen in the slightest presence of allergies.

One of the main reasons a pregnant woman is prevented from smoking tobacco is the several side effects it can pass on to the unborn child and this includes asthma. A baby whose mother smokes tobacco during pregnancy has a higher risk of developing the disease while in the womb and it becomes a full blown asthma during birth.

Premature birth can be related to the development of asthma because of the child's weak immune system. During birth, a baby fights off several triggers outside the womb, this is why it is very important to build them a strong immune system even before they are born.

Symptoms of asthma in children

Chronic coughing is one of the most notable signs of an asthma attack in children. The coughing is caused by the constricted airways to make room for air, thus, voluntary and involuntary coughing are essential in order to relax the lungs and to pump air into it.

Wheezing sound is caused by the air passing through the inflamed airway. As it passes through the constricted area, the tiny opening makes it hard for the child to breathe air, causing the wheezing sound and labored breathing at the same time.

Breathing difficulty is a result of a partially blocked airway. Children should be given immediate medical attention as the attacks can escalate faster than you expect. Keeping the child calm during an asthma attack can help reduce the inflammation on the air passage.

How to reduce the risk of asthma in children

Generally, asthma can be controlled. Children who have asthma tend to overcome this illness as they grow older, however, if children are constantly exposed to its triggers, there is a big chance that they will have to live with the disease forever. Here are some helpful ways of reducing the risk of children to asthma.

Keep them away from pollutants

Pollutants include exposure to secondhand smoke, polluted air and dirty environment. Pollutants can be all over the place and they are usually airborne. Making sure that the air is clean, especially inside the house will prevent asthma attacks and help the child's lungs and airways to recuperate.

Once a child is diagnosed with asthma, parents should know what triggers this illness and what they can do to avoid them. One of the main triggers of asthma is food allergy. Parents should know the different kinds of food that should not be eaten by the child. Food allergies, including certain medicines can cause asthma attacks. It is best for parents to consult with the child's doctor before giving her any medication.

Keep a clean and dust free environment for the child

A child who suffers from asthma should have a living space conducive to the illness. The house should be free of allergens. Make sure you have clean pillows and blankets, as well as dust free table tops and cabinets. Avoid carpets as much as possible as they can serve as a living space for dusts and mites.

Weight can also be considered as one of the  factors in the development of asthma, especially for children. While there is no concrete  study that confirms this theory, medical researchers observed that there is a greater chance of asthma attacks for obese children than those who are in their weight range.

Children need to learn how to relax most of the time as a stressful environment or situation can trigger an asthma attack. Parents need to keep their children away from emotional stress as much as possible.

Diagnosing asthma in children will usually involve making a doctor appointment where your child will go through a more complete examination of their symptoms. The doctor will take the child's medical history, evaluate symptoms and diagnose any underlying illnesses that may be present. Make sure to provide an accurate medical information about your child and volunteer any information that may help your doctor understand your child's symptoms. A nose and throat examination will likely be performed and the doctor will also listen to your child's breathing using a stethoscope. A wheezing sound will indicate breathing abnormality. Doctors will also routinely check on the possibility that your child may be allergic to certain foods or medicine and will ask whether you keep a pet at home.

Asthma in children is treatable. It can be controlled as long as you keep your child away from the common triggers of asthma. Certain medications can also ease your child's symptoms and building his immune system will also help overcome an asthma attack. Make sure to give your child the right nutrition, make them exercise, and provide a clean and happy environment to make them healthier to reduce the incidence of their asthma attacks.

How can you prevent asthma attacks

Testosterone Levels Can Predict Why Women Are Asthmatic

Asthma can be Diagnosed By A Simple Asthma Saliva Test

Asthmatics Can Benefit More with Yoga