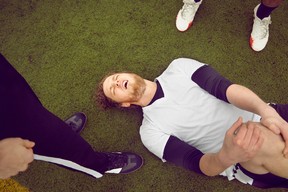 ries of any kind to the body are undesirable but knee injuries are especially bad. However, many people including athletes, gym enthusiasts, etc., suffer from knee injuries often. Presently, the surgical treatments for repairing knee injuries are quite costly. Even if you undergo these treatments, there is no guarantee that you will be alright in the long run. That is because, cartilage degeneration after a surgery is not uncommon; it can even progress into painful arthritis.

To put an end to this problem, orthopedics research team at the University of Iowa is working on a solution that is least invasive, practical and low cost. If proven successful this approach will be able to repair cartilage and prevent osteoarthritis. This research is featured in the May issue of the journal Arthritis and Rheumatology.

Yin Yu, first author of the study, a graduate student in the lab of James Martin, PhD, UI assistant professor of orthopedics and rehabilitation said that they are working on creating an injectable, bioactive hydrogel that has the ability to repair cartilage damage and regenerate stronger cartilage. This gel will also help in delaying or stopping the development of osteoarthritis and will likely eliminate the need for total knee replacement.

In the experimental model of the cartilage injury, when the custom-made hydrogel with SDF1 was injected it was found that the precursor cells migrated toward the SDF1 signal and filled in the injury site. Further application of a growth factor caused the cells to mature into normal cartilage that repaired the injury. Yu said that the results of the experiment were very encouraging. The newly formed cartilage integrates seamlessly with the undamaged tissue; it has normal concentrations of proteoglycans, good structural properties, and looks like normal cartilage. However, it was noted that this new tissue is not as mechanically strong as a normal cartilage. Yu and Martin opined that physical therapy and exercise might improve its mechanical properties.

Martin said that the only cure for osteoarthritis at the moment is total knee replacement. But, it is not a suitable option for young patients as over the years the artificial joints wear out and might need multiple replacements eventually. He further added that with their approach body's natural repair and healing properties is leveraged. We just need to know how to manipulate it right to make use of the cartilage's regenerative potential.

In order to translate this experiment into a therapy a growth factor need to be incorporated into the gel in such a way that there is a stepwise release of the attractant SDF1 followed by the growth factor. For this, Martin and Yu have teamed up with UI pharmacy professor Aliasger Salem, PhD, to engineer that property into the gel. Salem has expertise on microfabrication techniques for creating novel drug and gene delivery devices, to test two technologies- nano-size plasmids carrying genetic instructions for the growth factor or microspheres loaded with the substance”to incorporate the growth factor into gel.

Martin is hopeful that they will be able to develop a treatment that is usable for humans. Trails on animals are likely in about a year time and the results are favorable human trails might follow in due time.

If all else fails, try this step-by-step program to effectively reduce pain and maximize your workouts, keeping knee injuries at bay: https://www.kneeinjurysolution.com/?hop=orenvardy