Allergies are difficult conditions to deal with. An allergy is an immune system disorder triggered by an external stimulus known as an allergen. The typical symptoms of allergies include skin irritations, a runny nose, and asthma attacks. Allergies vary in severity and in the worst cases, may lead to an anaphylactic shock that can be fatally a life and death condition.

Allergic reactions are a type of hypersensitivity, thus they vary in intensity based on the allergen and the body of the patient. These reactions are usually acquired and develop immediately once exposed to an allergen. Fortunately, allergies can be easily diagnosed and there are several available medications for its treatment. Research has revealed ample information about the different types, pathologies, and forms of treatment for many kinds of allergies.

There are different types of skin allergies that are caused by different allergens and contributing factors. Eczema, also known as atopic dermatitis, is a very common condition characterized by red blotches and rashes all over the body. The skin begins leaking fluid, leaving it dry and prone to irritability.  Allergic contact dermatitis has similar symptoms and is brought on by having physical contact with an allergen, such as a poison ivy. Hives are another type of inflammation characterized by swelling caused by leaks in the blood vessels.

Angioedema is another similar swelling condition. Experts suggest that skin allergies may develop as a result of vulnerability to bacteria. This stems from a lack of exposure to bacteria while young that usually serves to build immunity against them. There are several ointments used to treat skin irritations. Patients are also advised to bathe constantly and regularly care for their skin. Corticosteroids are effective in suppressing symptom outbursts.

Food allergies are immune responses that occur when the body perceives digested food particles in the bloodstream as harmful. Any kinds of food can start an allergic reaction. Common food allergens are peanuts, shellfish, tree nuts, wheat and eggs, all of which account for 90% of all food allergies. It is also likely that other foods related to or in the same groups as these may also be allergens. Parents have a 75% chance of passing their food allergies on to their offspring.

The symptoms of food allergies include hives, angioedema of the face, nasal congestion, breathing difficulty, vomiting, abdominal pain, and fainting. Diagnoses are conducted via skin tests, blood tests, patch testing, and food challenges to test for symptoms when given a sample of the allergen. The simplest preventative measure against food allergies is to completely avoid allergens. Desensitization therapy may help people consume foods that are allergens without triggering a reaction. If an allergen is consumed and anaphylaxis occurs, a shot of epinephrine is used to counter the reaction.

Drug allergies are triggered by medications and often do not occur immediately after the first exposure. Upon subsequent administrations of the drug, the body develops antibodies that prompt white blood cells to produce histamines that eventually trigger the allergic reaction. Common drug allergens are penicillin, tetracycline, codeine, phenytoin, carbamazepine, anticonvulsants, and insulin.

Reactions can also be triggered by dosage, constant exposure, and period of administration. Other risk factors include sex, age, and genetic predisposition to medication. The symptoms of drug allergy reactions are similar to those of other allergies, namely skin inflammation, shortness of breath, and a risk of anaphylaxis. The allergy is easily diagnosed through skin tests and putting the patient under observation for symptoms. The best way to avoid symptoms is to stop using the drug allergen. Desensitization is also useful, especially when the patient needs the drug as a treatment.

Animals can cause allergic reactions in different ways. Their skin flakes, urine, saliva, and dander can all trigger an allergic reaction. Pet allergies, a form of allergic rhinitis, are very common among households with dogs, cats, and birds. The pet itself may also not necessarily cause the reaction, but its feces, fur, or feathers can be responsible for collecting and bringing in other allergens. Symptoms include sneezing, itching, watery eyes, and nasal congestion when near animals. While hives and asthma can be triggered, pets have not been known to cause as severe an allergic reaction as other types of allergens. A diagnosis can be made with a simple blood or skin test and management simply involves keeping away from pets that induce a reaction. It is advised to regularly clean a household with such a pet, to remove any allergens that have been shed. An allergy shot or immunotherapy is a proven effective form of treatment for long-term symptoms.

One of the most common allergens is insect venom, with around 2 million people being allergic and 50 deaths attributable to the venom in the U.S. alone. Typical insects with allergen venoms are the wasp, bee, hornet, fire ant, and yellow jacket.  Cockroaches can also trigger allergies, though only by being near people and not actually biting them. Insect venom induces the usual allergy symptoms, including severe swelling and a hyped-up pulse. Diagnosis can be difficult, as many often mistake symptoms for normal reactions to insect bites. It is advisable for a patient to learn how to self-administer an epinephrine shot in case a severe reaction unexpectedly occurs. Venom immunotherapy or allergy shots are also available and are effective in dealing with symptoms and preventing any future reactions to insect bites. Patients are advised to exercise caution when outdoors and walking on grass barefoot or with skin exposed.

Dust is another common and troublesome type of household allergen. Dust particles can contain several other types of allergens and triggers, such as pet dander, animal droppings, and mold. They may also contain dust mites that can cause skin irritation through their feces and the proteins on their bodies. Exposure to dust leads to common respiratory symptoms like asthma. Dust allergies can be diagnosed by an immunologist by asking about the patient’s environment and family history. Prevention involves avoiding dusty areas and maintaining a clean household. Immunotherapy and medications are also available.

Some proteins in rubber latex can trigger an allergic response. When the skin comes into contact with latex, the body mistakes it for a harmful substance and induces the reaction. A reaction may also occur from inhaling latex particles in the air. Symptoms are similar to usual allergies and a diagnosis can also be made with a skin test or by consulting a doctor immediately when symptoms begin to occur. People at risk should stay away from latex-containing products, such as gloves, certain toys and clothes, motorcycle handgrips, and condoms. The most common occurrences of latex in everyday products call for patients to always have epinephrine kits on hand.

Hay fever is a very common form of allergy with typical symptoms and is another type of allergic rhinitis. It leads to a runny nose and irritation in the eyes known as allergic conjunctivitis. Hay fever is caused by allergens in the air, most notably pollen, as it commonly affects people in the spring. The reaction history of a patient is an important factor in the diagnosis. Hay fever is treated with a variety of medications, such as antihistamines, decongestants, and nasal spray.

The Risks and Dangers of Nasal Polyps 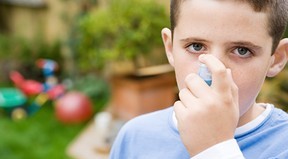 Asthma in Children – Parents Guide on Reducing Their Risk