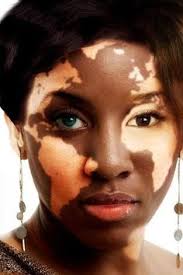 The white patches in vitligo

Vitiligo is a skin disease that is characterized by fine, white patches appearing on the skin. The main cause of this skin appearance is the loss of the ability of the cells to produce melanin, which is responsible in giving the skin, eyes, and hair its color. The condition can affect almost all areas of the skin, especially those with longer exposure to the sun such as the face, neck and hands. Both small and big patches may occur and it affects all skin types. Vitiligo is not contagious and is often permanent.

The cause of vitiligo is the absence or decreased melanin in the body. Melanin is a specialized skin cell that produces the eyes, hair and skin colors. The cause why the body is unable to produce melanin remains unclear, but autoimmune disorders and exposure to neurochemicals are suspected to cause damage to the body's melanin producing cells. Stressful conditions, skin damage such as cuts or severe sunburn and exposure to certain chemicals are also possible causes.

An autoimmune disorder is a condition where the body's own immune system attacks its own healthy cells and tissues. The most common type of vitiligo, which is the non-segmental vitiligo is associated with autoimmune disorders. Antibodies attack the melanocytes, causing destruction to the healthy cells responsible for producing melanin. Vitiligo may also be due to the neurochemicals produced from the nerve endings in the skin, which release poisonous chemicals that are responsible for the cellular death of melanin producing cells.

The following are the known risk factors that can predispose individuals to develop vitiligo:

The main symptom of vitiligo is flat, white spots or patches on the skin. The first white patch usually develops after it has been exposed to the sun. Initially, the vitiligo may start as a discoloration in an area of the body that may appear to be pale. Gradually, the patch becomes completely white. Some of them may appear to have white spots surrounded by a pale skin. In the skin areas above the capillaries and blood vessels, it may appear pink. The edges of the patch may appear to be smooth and irregular. Some of them may be inflamed and appear to be darker than the others (red to brownish discoloration of the skin). It does not cause any pain or discomfort, but some of them may be itchy. Vitiligo can make a person susceptible in developing sunburn when exposed to the sun.

The most common areas of vitiligo include the skin around and inside the mouth, around the eyes, fingers and wrists, armpits, groin and genitals. It may develop in the areas where there are hair roots such as the scalp. The absence of melatonin in the skin can also turn hair into gray, especially in the affected area. It is often unpredictable how fast vitiligo can spread in the body. Every person with the condition manifests varieties of pattern in the development of vitiligo. In certain instances, it has been observed that small, symmetrical patches tend to develop slowly while localized patches tend to progress more rapidly.

The two main types of vitiligo are segmental and non-segmental. In rare cases, vitiligo may affect your entire body. This is known as universal vitiligo. Segmental vitiligo is a type of vitiligo that appears locally on a specific area. This is known as localized or unilateral vitiligo, which occurs commonly in children. Unilateral vitiligo starts earlier and affects 3 in 10 children. Non-segmental vitiligo, on the other hand, is also known as bilateral or generalized vitiligo. In this type of vitiligo, the symptoms appear on both sides of the body and they appear to be symmetrical. It usually appears at the back of the hands, the arms, eyes, knees, elbows and feet.

As with other medical conditions, physical examination and history taking is important in diagnosing vitiligo. Your doctor would be able to diagnose vitiligo by ocular and physical assessment without the need of performing laboratory tests. Among the areas of interest of a physician when diagnosing vitiligo involves the length of time the person has the vitiligo, the presence of a history of vitiligo in the family and whether or not the person is suffering from an autoimmune disorder. Most of the time, doctors also take note whether the patient can easily burn the skin when exposed to the sun.

An ultraviolet lamp is often used to assess the patches on the skin more thoroughly. The test is undertaken inside a dark room and the lamp is positioned 4 to 5 inches away from the skin. Patches of vitiligo are easier to see under the ultraviolet light. This may also assist your doctor to differentiate the patches of vitiligo from other skin disorders such as Pityriasis (an infection that causes skin discoloration of small round patches).

Because vitiligo is greatly linked to autoimmune disorders, you may also be tested for autoimmune conditions. A sample of blood may be taken to check how well your thyroid gland is functioning. You may also be evaluated for Addison's disease and diabetes.

The white patches in vitiligo tend to be permanent, although there are a number of therapies and treatments available. The treatment modalities include phototherapy and medications or the combination of both. Others have undergone treatments such as topical pimecrolimus or tarcolimus (medicines usually used for eczema), skin grafting, depigmentation, counselling and support groups as well as complementary and alternative medicine. In some case, using these treatments may restore pigmentation but such effects are usually temporary. Treatment however may delay the condition but cannot stop it from progressing.

Complementary and alternative therapies for vitiligo are getting popular nowadays. Some individuals with the conditions seek alternative medical options, including oriental medicines and folk medications for it. Generally, CAT may include, but are not limited to lifestyle modification including diet restrictions, regular exercise, stress or trigger reductions and herbal treatments.

One herbal remedy that is currently recognized for the treatment of vitiligo is gingko biloba. There is very limited evidence published to prove the effectiveness of the herb, however. It is believed to have antioxidant and immodulatory effects that will help prevent the rapid progression of vitiligo and promote repigmentation of the affected areas.

If you decide to use herbal medicines, contact first your primary health care provider since they may affect the effectiveness of your current treatment. It is imperative to call your doctor first to prevent life threatening conditions that may happen, especially drug to drug or drug to herb adverse reactions that may occur.

Vitiligo is an acquired skin disorder that affects the quality of life of a person, particularly one's self esteem. Due to lack of melanin you may be at risk for sun sensitivity and skin cancer. Treatment and therapies including support groups are available for persons with vitiligo. If you are suffering from vitiligo or you have noticed white patches on your skin, contact your health care provider as soon as possible for proper diagnosis and management of the condition.

Find An Effective Treatment for Vitiligo