Uterine fibroids are common growths that appear in the uterus. They are noncancerous and generally seen during childbearing years. They are also known as leiomyomas or myomas. They do not develop cancer. These fibroids generate from the smooth, muscular tissue present in the uterus known as myometrium. It's a farm and rubbery mass which is different from the surrounding tissues. Sometimes they grow slowly and sometimes fast. They may stay in the same size for some time. Some of these fibroids may shrink automatically and some others may grow to a bigger size. Many of these fibroids disappear after pregnancy and the uterus gets back its normal size. 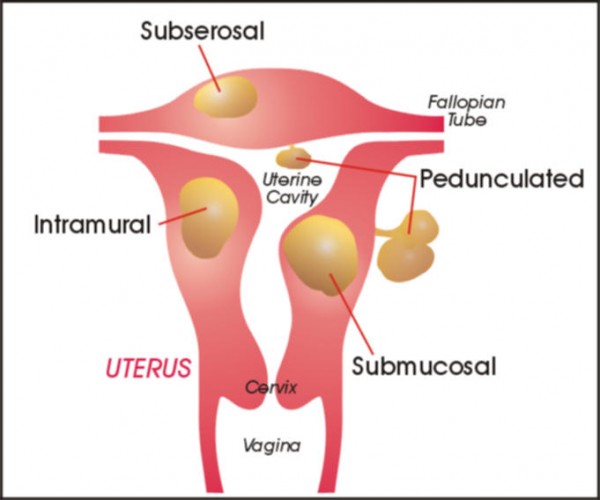 Fibroids cannot be detected by human eyes. Since they are bulky masses, they may change the shape and enlarge the uterus. These fibroids can be single or multiple.

Generally they do not cause any symptoms and so it may be difficult to even know if the patient is suffering from uterine fibroids.

When the symptoms appear, these symptoms may be similar to-

The location, number and size of the fibroids decide the signs and symptoms.

This type of fibroids grows in the inner cavity of the uterus. They result in longer and heavy menstrual bleeding. They may also affect pregnancy and cause difficulty in it.

These are seen on the outside of the uterus. Sometimes they may press the bladder and result in some urinary symptoms. If the fibroids increase in size and press the rectum, then it may cause a pressure sensation. If it presses on the spinal nerves, it causes backache.

These are the fibroids, which are seen within the muscular uterine wall. When they become large, they can change the shape and size of the uterus. They may also result in longer and heavier periods. Sometimes, they can cause pain and pressure.

The actual causes of uterine fibroids are not known. However, different researches mention the following factors-

Many fibroids are found with changed genes, which are different from the normal uterine muscle cells. It is also seen that fibroids are found in families and identical twins. So, it means that there is a possibility that uterine fibroids occur due to genetic changes.

It was found in research that some substances like insulin like growth factors which are necessary for maintaining body tissues may also help in the development of fibroids.

There are several risk factors associated with uterine fibroids. The following factors have an impact on the development of fibroids-

If someone from your family had fibroids, you have a higher risk of developing it.

Starting of menstruation at a comparatively early age, a diet with less vegetables and fruits and more red meat, drinking alcohol are some other factors.
Find the top Uterine Fibroids Cure, Click Here!

Symptoms and causes of uterine fibroids

How to protect yourself against uterine fibroids

Getting Rid of Uterine Fibroids – Know Your Treatment Options