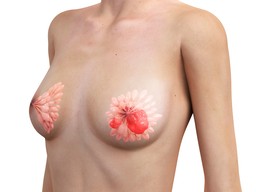 What is Breast Cancer?

Breast cancer is a type of cancer that develops in the breast. The breast is an organ which contains fat, connective tissue and lobules which produce milk. Milk is produced in these lobules and goes through tiny tubes or ducts that conduct milk through the nipple. The breast contains billions of cells that multiple in an orderly fashion. Dead or damaged cells are usually replaced by new ones. If the breast is affected by cancer, its cells multiply uncontrollably and cells may clump together to form a mass or a tumor. Cancer that begins in the lactiferous duct or the milk duct is often known as ductal carcinoma and is the most common type of breast cancer. Lobular carcinoma, a type of cancer that starts in the lobules is less common.

The causes of breast cancer are still unknown however there are some people who are more predisposed to breast cancer than other people. Some risk factors include older age, genes (women who have relatives who had breast cancer are also prone to develop breast cancer), carriers of BRCA1 and BRCA2 genes as well as the TP53 gene, a history of breast cancer, having certain types of breast lumps, dense breast tissue, exposure to estrogen, obesity, taller height, increased alcohol consumption, radiation exposure, HRT (hormone replacement therapy) and certain jobs such as those involving night shifts.

Breast cancer may give rise to various signs and symptoms. Early signs and symptoms usually involve an area of thickened tissue in the woman's breast or a lump. Majority of the lumps are cancerous; these lumps should be checked by a health care professional. Other signs and symptoms which may warrant consult to a physician include pain in the armpits or breast that does not seem to be related to the woman’s menstrual period, pitting or redness of the skin of the breast (orange peel), a rash around or on one of the nipples, swelling (lump) in one of the armpits, an area of thickened tissue in a breast, nipple discharge which may be bloody, sunken or inverted nipples, changes in the size or the shape of the breast, and peeling or flaking of the nipple skin or breast skin.

Diagnosis of breast cancer usually begins during a routine breast cancer screening, or after detecting certain signs and symptoms. This may be accomplished through breast examination, x-ray or mammogram, breast ultrasound, biopsy, and breast MRI (magnetic resonance imaging) scan. Once cancer is diagnosed, it should be staged as to the extent of the tumor. Breast cancer can be prevented using several lifestyle changes such as drinking alcohol in moderation or avoiding alcohol consumption, physical exercise, consuming a healthy diet, consuming fish oils, postmenopausal hormone therapy, and maintaining a healthy weight.

A recent study done by researchers from the Dartmouth-Hitchcock Norris Cotton Cancer Center has found out that conventional way HER2 testing may have important limitations. This study tumor samples from a large group of women and found that 22 out of 530 women had their tumor type incorrectly classified. They reported their findings in a publication titled “Assessing the Discordance Rate between Local and Central HER2 Testing in Women with Locally Determined HER2-Negative Breast Cancer,” which was published in Cancer on June 13, 2014. The analysis was based on the VIRGO study, a large, disease-based, observational cohort study of more than 1,200 women with HER2-negative metastatic breast cancer from June 2008 through January 2011. Out of the 1,267 patients enrolled in VIRGO, 776 submitted samples for this study from which 552 were suitable for centralized testing using IHC and FISH assays.