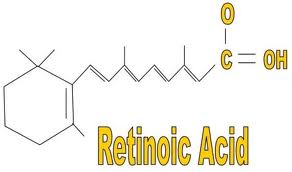 What Is Retinoic Acid?

Retinoid acid is a Vitamin A derivative that has various functions in the body such as the growth and maintenance of body cells and tissues. This is why all-trans retinoic acid is being manufactured in laboratories and is being used as a topical solution to treat various skin conditions such as acne; it can also be taken orally to treat certain conditions such as acute promyelocytic leukemia, a blood cancer which gives rise to too many immature blood-forming cells in the blood and bone marrow. All-trans retinoic acid is currently being studied as a supplement for other types of cancers.

Retinoic acid is also known as ATRA, retinoic acid, tretinoin, and vitamin A acid; it is the oxidized form of Vitamin A, with only partial vitamin A function. It functions in determining position along embryonic anterior/posterior axis in chordates. It acts through Hox genes in the body which controls anterior/posterior patterning in early developmental stages. It binds to heterodimers which then activates gene transcription.

Retinoic acid is the component of Vitamin A which is responsible for its activities. Once applied to the skin, it can help normalize hyperkeratinization and have demonstrated significant anti-inflammatory effects. Retinoids are potent agents that can normalize abnormal growth and differentiation in skin cells. It can also inhibit factors such as leukocyte activity, release of pro-inflammatory cytokines and other mediators, and the expression of transcription factors and toll receptors involved in immunomodulation. Thus retinoids can be used to control numerous inflammatory and keratotic dermatoses. Topical retinoids can also reduce antibiotic resistance by controlling and maintaining remission of inflammatory and noninflammatory diseases. Retinoids can also interact with nuclear receptors on cells; they can also activate genes which deal with stress.

Tretinoin is a form of retinoid which is formed in the skin from all-trans retinol by basal keratinocytes. Both all-trans retinoic acid (tretinoin) and all-trans retinol are naturally occurring retinoids. Retinoids can decrease comedone formation and microcomedo formation and thereby reduces both inflammatory and noninflammatory acne lesions. Topical retinoids reduce hyperkeratinization and allow enhanced penetration of adjunctive topical agents. Adapalene, another retinoid, heals abnormal desquamation of the skin, modulates cellular differentiation, and possesses anti-inflammatory properties. These retinoids can also reverse photodamage in the form of decreased clarity, progressive wrinkling, hyperpigmentation, roughness, and lack of tone. Improvement in skin wrinkling and roughness has been observed with long-term application of tretinoin. Retinoids may also protect the skin against damage from UVA and UVB rays. They can facilitate the ability to prevent collagen loss and stimulate new collagen formation within the papillary dermis of sun-exposed skin. More studies are actually needed for the other benefits brought about by retinoic acids.

A recent study made by researchers at the University of Montreal and CHUM Research Centre (CRCHUM) have demonstrated that retinoic acid can treat obesity and type 2 diabetes and prevent their cardiovascular complications. The findings were presented June 6, 2014 at the Annual Conference of the Canadian Nutrition Society in Saint John’s, Newfoundland. Tests run in obese and insulin resistant mice revealed that retinoic acid reduces the risk of cardiac apoptosis, stimulates the expression of cardio-protective genes reduced by the disease, and protects against the accumulation of collagen in the cardiac muscle, thus avoiding the occurrence of fibrosis and possible associated future complications