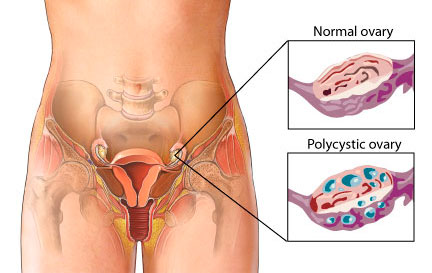 Polycystic ovarian syndrome or PCOS is a medical condition which is characterized by the appearance of cysts that develop in your ovaries (polycystic ovaries), failure to ovulate, and having high levels of male hormones called androgens in your body.

Polycystic ovaries are harmless cysts which are not more than 8mm in size. These cysts represent immature follicles which do not develop into mature eggs. This means that ovulation has not taken place. Signs and symptoms of PCOS usually become evident during late teens or early twenties; these signs and symptoms usually may include irregular periods or no periods at all, difficulty getting pregnant (because of irregular ovulation or failure to ovulate), excessive hair growth (hirsutism) usually on the face, chest, back or buttocks, weight gain, thinning hair and hair loss from the head and oily skin or acne. Later on these patients may be at risk for more complicated problems such as type 2 diabetes and high cholesterol levels.

There is no known cause for polycystic ovarian syndrome but one cause may be faulty genes which run in families. PCOS can predispose women to have abnormal hormone levels in the body, including having high levels of insulin. Increased amounts of insulin in the body contribute to the increased production and activity of hormones such as testosterone. Being overweight increases the amount of insulin your body produces. Polycystic ovarian syndrome can lead to abnormal hormone levels in the body.

Polycystic ovarian syndrome can especially lead to insulin resistance. Insulin is a hormone produced by the pancreas to control the amount of sugar in the blood. It helps move glucose from blood into cells, where it is broken down to produce energy. Resistance to insulin means that the body’s tissues are resistant to the effects of insulin. The body therefore has to produce extra insulin to compensate. This can cause the ovaries to produce too much testosterone which can further interfere with the development of the follicles and prevent normal ovulation. Insulin resistance can also lead to weight gain, which can make PCOS symptoms worse because having excess fat causes the body to produce even more insulin.

Mothers of Women with PCOS

To know more about other reproductive problems, feel free to browse our other articles on this site.