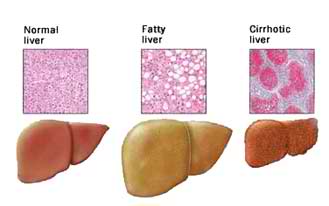 What is Alcoholic Fatty Liver Disease?

The liver is an important organ in the body because it has several functions such as filtering toxins from the blood, aiding digestion of food, regulating blood sugar and cholesterol levels and helping to fight infection and disease. This organ can easily adapt to changes and is also capable of regenerating itself. After consumption of alcohol, some liver cells may die; however the liver has the capacity to develop new cells to replenish old ones. Prolonged alcohol consumption over the years can reduce the liver's ability to regenerate new cells, thus causing serious damage to the liver.

Alcoholic fatty liver disease is a medical condition characterized by liver damage which may be caused by alcohol abuse. This medical condition can bring about various signs and symptoms as well as more life-threatening conditions. These signs and symptoms do not often become evident until the liver has severe damage. Symptoms may often include generalized body malaise, weight loss, loss of appetite, yellowing of the eyes and skin or jaundice, swelling of the legs and of the abdomen, confusion, drowsiness, vomiting and bloody stools.

On the other hand, alcoholic hepatitis is characterized by inflammation of the liver. This is still reversible when consumption of alcohol is stopped. Severe alcoholic hepatitis however is more serious and life-threatening. The final stage of liver disease is cirrhosis which occurs when the liver is scarred too much. Cirrhosis is no longer a reversible medical condition however alcohol consumption during this stage can decrease the risk for further damage and early death. Life-threatening complications of alcoholic fatty liver disease include internal (variceal) bleeding, a build-up of toxins in the brain (encephalopathy), fluid accumulation in the abdomen (ascites) with associated kidney failure and also liver cancer. These complications can all be prevented by stopping alcohol consumption.

There is a new causative link found between a key cell stress response pathway and alcoholic liver disease. This link was found by researchers from the Icahn School of Medicine at Mount Sinai. These researchers have discovered that by blocking a protein called ATF6 (or activating transcription factor) helped prevent alcohol-induced fatty liver disease while over expression of the protein caused the disease to develop in zebrafish. The results of this study were published in the journal PLoS Genetics.

You can read more about alcoholic fatty liver disease in our other articles in this site.

You might also want to try Ezra Protocol Genuine Solution For Fatty Liver And Obesity – Ezra Protocol Is Now Socially Proven In 22 Countries Click Here! to claim your copy