Smoking is well associated with causing multiple health risks and many of these have been frequently taught and showed in research in the last few decades. Smoking cigarettes is a highly addictive habit that has been known for many years to have several very dangerous chemicals that can cause a variety of problems. For instance, smoking places people at higher risk of heart disease, lung and throat cancers, and worsen various respiratory disorders. Recent studies seem to be suggesting that there are even more negative potential effects of smoking than the medical community may have originally realized.

Smoking can harm your eyes

Quitting smoking is very helpful and can reduce the risk of all of the problems detailed above, though the risks of each are still often higher than for people who have never smoked. Recent studies have linked quitting smoking with reducing the risk of cataracts. A cataract is a medical condition in which a film develops over the lens of the eye. The cataract can gradually obstruct vision to the point of blindness. The main way of treating cataracts is by surgery, which can be expensive, have numerous complications, and may not completely fix visual difficulties after they have occurred. Cataracts are the most common cause of blindness in the world, both in developed and developing countries, and actually accounts for one million new causes of blindness each year. There are multiple different causes of cataracts, including aging and trauma. One other common cause of cataracts is intraocular inflammation, which may explain why recent studies indicate that smoking may be related to developing cataracts as well.
Make the Change to Electronic Cigarettes and Enjoy Smoking Again!

A twelve year study was recently published in January 2014 in JAMA about the link between smoking and cataracts.  The study was a prospective cohort study done in Sweden with the results from over 44,000 men. The study showed that men who smoked multiple cigarettes daily had a 42% higher risk of developing cataracts than those who had never smoked. In fact, smoking at least 15-20 cigarettes daily was associated with an increased risk. Twenty years later, those who smoked just 15 cigarettes a day still had a 21% higher risk of developing cataracts. Every year of not smoking the risk of cataracts was decreased. Those with cataracts were more likely to have nuclear sclerosis and posterior subscapular cataracts. Similar results have been found in studies with women in the United States. As of 2005, there were twelve other studies looking at the risk of smoking with cataract formation, but this was the first study that was able to look at the risks associated with developing cataracts even years after quitting smoking.

It is not totally understood how exactly smoking increases the risk of cataracts, but the two are definitely related. It is thought that free radicals in tobacco smoke directly affect the eye and can damage some of the proteins in the lens. Also, smoking decreases the amount of antioxidants in the body, which are normally used to repair damage. These two problems combined can greatly increase the risk of damage to the lens and thus cataract formation.

Make the Change to Electronic Cigarettes and Enjoy Smoking Again! 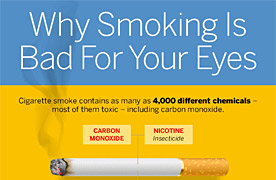 Evidence is accumulating in other studies as well that cataracts may be added to the list of things that smoking can at least partially cause. Hopefully these studies will help smokers and health care professionals to take a more specific look at the risks associated with smoking, and the long-term effects that can accompany them. Hopefully, knowing that the high risk of losing your sight now or even twenty years from now will help encourage smokers and the health care professionals who treat them to think much more seriously about the effects can have on all of us.